With the colder temperatures now here, we are starting to see the burning issues again with the shore power plugs. With the use of heaters in the boat, the extra draw of electricity through shore power is higher, which seems to be a catalyst in the plugs burning. There are many Internet forums that discuss this issue as it it a growing concern within the industry – especially when it is unsafe and leads to a fire.

We were recently doing an annual engine service on a boat, when we smelt the ‘burning electrical – plastic’ smell, and realized it was the shore power plug – luckily we were there to unplug it, and prevented that potential boat fire!

We have research alternatives, and the SmartPlug system appears to be the best option. They state they have solved the overheating issue with a system that:

The Smartplug is easier to use:

To help with the reduction of boat fires this winter in our local waters, please contact us for a free inspection of your boat’s shore power!

I just finished another pre-purchase mechanical survey, and doing a blow-by test on the engines is part of our investigation. Each time, people always ask ‘What is blow-by?’

Basically ‘blow-by’ is the air and combustion gases from the cylinder, on top of the piston that escape past the piston rings into the crankcase. No engine will have perfect sealing rings, though as the rings, and cylinder wear the blow-by will increase giving an indication to the engine health.

Blow-by tears the oil from the piston and rings. At first it vaporizes and then it becomes an aerosol, which you see as a film or fumes around the crankcase vent tube. When mixed with engine oil, blow-by produces sludge and acids that attack all engine parts. The unburned fuel dilutes the lubricity and viscosity of the engine oil, attacking engine bearings, the valve train, and cylinder walls.

When the blow-by becomes more than the crankcase ventilation can handle, other problems start to happen, from blown out crankshaft main seals, to an engine ‘run away’, where the oil vapor becomes a fuel for the diesel engine and it then starts running on it’s own engine ‘oil fuel’, with no ‘standard way’ to shut it down – a run away engine is rare, but extremely dangerous.

With the recent extreme freezing temperatures, we all had to pull together to help save people’s yachts. During times like these, it’s when we all appreciate a helping hand, to look after each others’ boats, to set heaters to prevent freezing, broken pipes, shovel snow, etc!

3C Yacht Services has decided to offer monitoring services to help out, and to offer the Basic monitoring package FREE to our regular local clients during times like these of extreme cold.

Rebuilt, More Power, Squeezing Back In!

Complete Amsoil treatment throughout – Amsoil Assembly lube, Amsoil break-in lubrication. Amsoil Signature Series Max-Duty 15w-40 Diesel oil, and Amsoil Filters, to give these engines the best of the best! Even the Coolant is Amsoil’s amazing Low-Toxicity, Bio-degradable coolant with specs even the US Military uses!

Paint is more than just a pretty face…

Paint not only makes it looks great, but with the proper paint, and applied correctly (no spray bombs here…) – it’s the best protection against corrosion on the external side of your expensive engines!!

CMISA Member of the week

https://www.cmisa.ca/index.html Canadian Marine Industries & Shipbuilding Association has 3C Marine & Diesel Ltd as their Member of the week, posted on their front page!

Spring Service Promotion – 20% discount on mechanical labour until April 30, 2021 – Contact us to book your spring service.

Recommend following your engine manufacturer’s maintenance schedule based on interval hours; We will print out each manufacturers schedule and consult with you on what is suggested to be done.

We offer full maintenance, repair, rebuild, and re-power services on all makes and models, all while providing the most options available to you on each job to fit within anyone’s budget.

All work is documented within our web portal where you as the customer get Internet access to service history, and to view pictures and read the tech reports of daily work allowing you to be in control each and every day.

3C Marine & Diesel is proud to represent Ultradeck – an exceptional line of synthetic marine decking that is proudly made in Canada.

From the durable, highest grade PE blend closed cell foam, to the best 3M adhesive possible, no expense was spared in the manufacturing of Ultradeck. Ultradeck is an amazing addition to any vessel.

Who else has seen this?

Raw water pump impellers – an item that should be on a regular service check list, but not always done. Some boat / engine combinations do not even allow access to these critical items to keep those expensive engines cooled. It’s a problem seen far to often, where the impellers break apart, then scatter little pieces of itself through the raw water cooling circuit, which then has to be pulled apart, inspected, and cleaned of debris, to ensure no plugged passages.

It’s a time consuming, high maintenance item, that can lead to some very expensive repairs! Ask us how Baudouin has addressed this issue, saving you money and down time! info@3cYachts.com 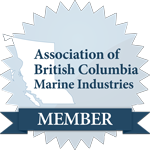